Lesson 1: The alphabet
The letters (step 3 of 8)
The good news and the bad other good news
Learning the Hebrew alphabet has some major upsides that should greatly encourage you as we begin. Unlike English, Hebrew has no capital or lower-case letters, there are only 22 letters to learn, and there is no reason to study handwriting.

But there are also some hard parts. (But who says hard isn’t also good?) First off, Hebrew is written right to left. This is not so big a deal for reading, but does get tricky when you try to type Hebrew words within an English sentence. (More on that below.) Also, a modern pronunciation of Hebrew (as we will employ) contains two guttural sounds foreign to English. Vowels are also a challenge. While occasionally the Hebrew letters indicate vowel sounds, most of the time vowel sounds are indicated by small dots and lines placed around the letters. This is not necessarily harder, but it certainly is different than what English speakers are familiar with. Finally, five of the Hebrew letters contain an additional form when they appear at the end of the word, and seven Hebrew letters can be pronounced in more than one way.
Setup
Let's take a few minutes to get your computer setup to use Hebrew. Here are the things you will need to do.
It starts with humility
One of the tough parts about learning a language is that you can feel like a small child at first as you learn the alphabet and really basic words. This is hard for us because we are proud. But thanks be to God that “those who walk in pride he is able to humble.” (Daniel 4:37)
The first test of your humility will be singing along to the A-B-C song. Or rather, since we are learning Hebrew, singing along to the א-ב (aleph-bet). So shut the door if you must, because to learn the letters you are going to have to be more than just a passive listener. I suggest echoing the singer the first few times, then trying to sing with her. Finally, note that there are four “dual-sound” letters. We'll talk more about those after the video.
A few more details
You will note that four of the letters in the song can make two different sounds, depending on whether they are accompanied by a middle dot (called a dagesh) or, with the case of ש, where the top dot is located. There are actually two different things happening here.
With the first three letters in the chart below, the pronunciation depends upon whether the letter is beginning or ending a syllable. Given prefixes, suffixes and morphology (how words “morph” with different parsings) in Hebrew, this means that the same letter in the same word can sound like a b in one context and a v in another. But no worries, you can always know which to say based upon the presence or absence of the middle dot, and the meaning is completely unaffected.
On the other hand, שׁ and שׂ are in effect different letters. That is to say, a שׁ will never get changed to a שׂ or vice versa. Rather, the presence of one over the other indicates which word we are dealing with.
Dual-sound letters
As mentioned above, Hebrew also contains five letters that use a distinct form when they appear as the last letter in a word. Here, as with the first three dual-sound letters, meaning is not affected. You just need to be able to read them!
Final letters
The last thing to know about the 22 letters in the Hebrew alphabet is that three of them can act as vowels. As mentioned, vowels in Hebrew are indicated through the placement of small dots and lines around the letters. (We will look at this in depth on the next lesson step.) The three letters below can be absorbed into those vowel markings at times and lose their consonantal function. This is much the same as the letter y in English. By default, y is a consonant as in the word yellow. But at times it can lose its ya sound and do all sorts of different things. In the word gray it affects the sound of the a, but itself is silent. In cyan it makes an ai sound. And in baby blue it is pronounced ee. The following letters in Hebrew can also be flexible, though thankfully not quite as flexible as the letter y in English! We will learn more of what they can do below and in the next lesson step.
Special letters
Can act as vowels 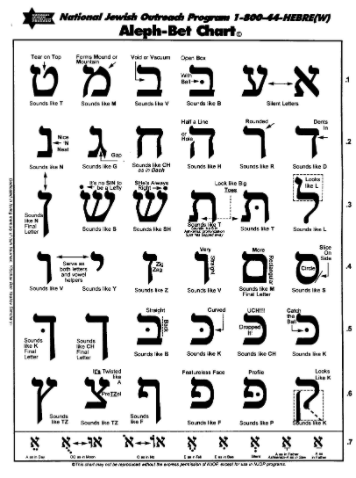 A very helpful Hebrew letters chart. It might be useful to print it out and have on hand as you begin reading.