Lesson 5: Verbs—commands and infinitives
Commands (step 3 of 8)
Imperative
The most basic kind of command is a 2nd person command—that is, a command addressed to the party being commanded. That means that for each stem, there are four different forms of the imperative—2ms, 2fs, 2mp and 2fs (though the 2fs is very rare). However, there is no need to learn a full paradigm of these four forms for each stem since they follow the same pattern as the imperfect and so are intuitive to parse.
In fact, it is helpful to think about all the command forms—imperative, jussive and cohortative—as slight modifications on the imperfect. Let’s take a look at the difference.
נָבָא
114x
prophesy (verb)
316x
נָבִיא prophet (noun)
from the same root
יָצַב
48x
stand (verb)
Only appears in the niphal
2ms imperative & imperfect
Notice that in the qal and piel (by far the most common stems for imperatives), the form is identical except for the fact the prefixed ת has been dropped. Also note that the pual and hophal forms are not present here because together they only appear twice in the entire Hebrew Bible.
וְהַקְשִׁיבוּ לָדַעַת בִּינָה
Note the imperative we saw in the devotional step at the beginning of this lesson. וְהַקְשִׁיבוּ is a ו conjunction prefixed to a 2mp imperative—“and pay attention.” You can see that this imperative is plural by the וּ that ends the form.
Jussive
A jussive is a less common, 3rd person*, command-like assertion. Instead of commanding the person(s) being spoken to, a jussive commands a party which is being spoken of. This is easiest to understand via example.
imperative — “Eat your food.”
jussive — “Let him eat his food.”
You can see in the jussive example that the speaker is commanding something to be done, without speaking directly to the person who is to do it. In addition, note that we say “command-like” because the jussive does not carry the full force and strength of a command. For this reason, we have translated it “let him eat his food” and not “he must eat his food.”
There is no paradigm to present in the case of the jussive because it is identical to the imperfect form. That is, when you find an imperfect form, you will need to determine if it is jussive or not based upon context alone.
Finally, note that I have put an asterisk after “3rd person” above. The reason is that the jussive is also used in the 2nd person when there is a negated imperative. The Hebrew word to negate a command is אַל. While it is not the most pleasant passage to read, we find an example of an affirmed and negated 2nd person commands in Genesis 19:8. Here, Lot is attempting to appease the perverted men of Sodom. Note the imperative וַעֲשׂוּ (“and do”) and 2nd person jussive with the negation particle אַל־תַּעֲשׂוּ (“do not do”).
אַל
725x
do not (adverb)
הִנֵּה
נָא
לִי
שְׁתֵּי
בָנוֹת
אֲשֶׁר
לֹא
יָדְעוּ
אִישׁ
אוֹצִיאָה
נָּא
אֶתְהֶן
אֲלֵיכֶם
וַעֲשׂוּ
לָהֶן
כַּטּוֹב
בְּעֵינֵיכֶם
רַק
לָאֲנָשִׁים
הָאֵל
אַל
תַּעֲשׂוּ
דָבָר
כִּי
עַל
כֵּן
בָּאוּ
בְּצֵל
קֹרָתִי׃
Cohortative
While the jussive is a sort of 2nd person command, a cohortative is like a 1st person command in which the speaker is, in a way, commanding himself. However, the cohortative also does not possess the full weight of a normal command and so we translate it with the word “let.” For example:
cohortative — “Let me eat my food” (singular) or “Let us eat our food” (plural)
As with the jussive, the cohortative form is identical to that of the imperative, though at times receives a a-class vowel + ה at the end of the word.
Take a look at Genesis 1:26, where you will find both a cohortative and jussive in a familiar text.
וַיֹּאמֶר
אֱלֹהִים
נַעֲשֶׂה
אָדָם
בְּצַלְמֵנוּ
כִּדְמוּתֵנוּ
וְיִרְדּוּ
בִדְגַת
הַיָּם
וּבְעוֹף
הַשָּׁמַיִם
וּבַבְּהֵמָה
וּבְכָל
הָאָרֶץ
וּבְכָל
הָרֶמֶשׂ
הָרֹמֵשׂ
עַל
הָאָרֶץ׃ 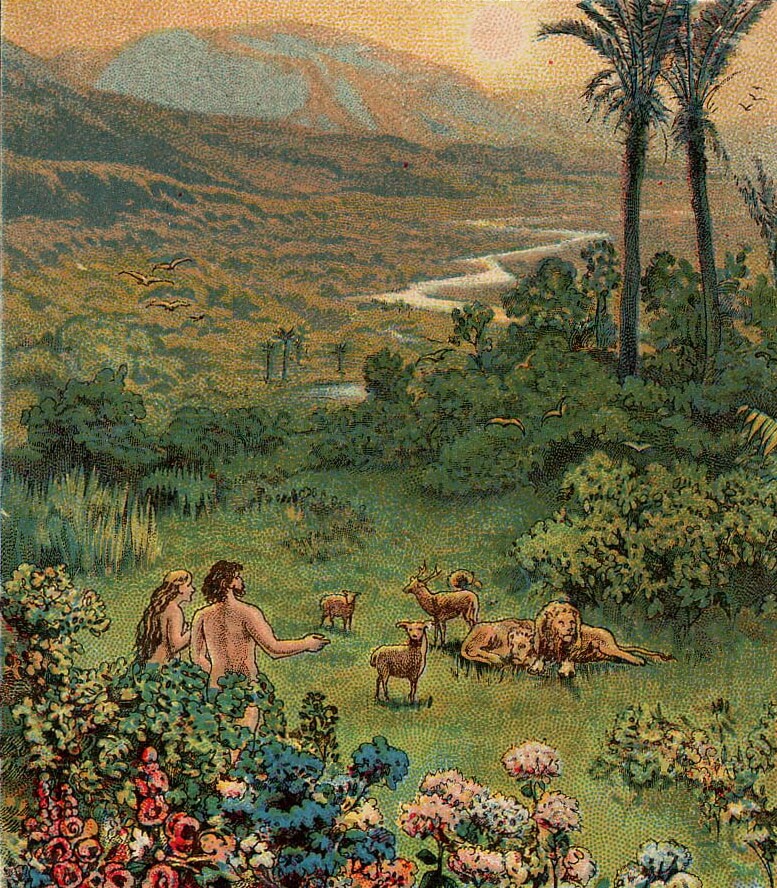 Link
Commands in the songs we’ve learned
There have been quite a few commands in songs we have already learned. Since most of them have been jussives and cohortatives, which usually have the same form as the imperfect, we have already taken note of them and called them imperfects. We will now become more precise and acknowledge them as likely jussives and cohortatives. (We say “likely” since this is sometimes a subjective call, given the identical forms.)
בֵּֽאלֹהִים
וְשִׁמְךָ לְעוֹלָם נוֹדֶה — “and your name unto eternity let us thank”
הִנֵּה אֱלֹהֵינוּ
In this case, the two verbs in this phrase are definitely cohortatives and not simple imperfects because of the kamatz vowel + ה added to the end of each of them.
נָגִילָה וְנִשְׂמְחָה בִּישׁוּעָתוֹ — “let us be happy and let us rejoice in his salvation”
לֹא־גָבַהּ לִבִּי
יַחֵל יִשְׂרָאֵל אֶל־יְהוָה — “hope, O Israel, for the Lord”
קוּמִי אוֹרִי
Here we see two imperatives. Note the י at the end indicating that they are both 2fs.
קוּמִי אוֹרִי — “arise, shine”
מַה־יְּדִידוֹת
Here, the base imperative is הֱבִיא with the נִי appended to the end as the object of the verb (something we will learn about in a future lesson).
הֱבִיאַנִי אֶל־בֵּית הַיָּיִן — “bring me to the house of wine”
קוֹלִי אֶל־יְהוָה
Again, the י at the end of the form indicates it is 2fs. The reason being is that the psalmist is addressing his own soul, and soul in Hebrew (“נֶפֶשׁ”) is generally treated as feminine.
בָּרֲכִי נַפְשִׁי אֶת־יְהוָה — “bless, O my soul, the Lord”
Biblearc app Path Courses Courses Learning Resources Login / Free Account Subscription
Glories Authors Groups Donate Gift certificates Ownership, thanks, copyrights and terms