Lesson 7: Prefixes, suffixes and construct form
Construct chains (step 6 of 9)
Combining nouns
In English, we can combine nouns together with the word “of” to mean all sorts of things. For example, “of” can mean “from” as in the phrase, “the word of the Lord.” It can also mean “belonging to” as in the phrase “the house of the brothers” (though we are more accustomed to expressing this sort of idea with an apostrophe—“the brothers’ house.” The word “of” can also convey relationship as seen in the phrase “the brothers of my lord.” Also, add to our list the sense of “containing” as demonstrated in the phrase “the book of the Law,” and the sense of “delivered by” from the phrase “Law of Moses.” And we could add still more to this list. The point is simply that this “of” construction in English (called a genitive construction in grammar language) is widely used and can mean a wide variety of things. The same goes for construct chains in Hebrew.
Instead of adding a connecting word like “of,” Hebrew changes the form of the first noun (often times a simple change in the vowels) to indicate it is in construct with the noun that follows. Consider these examples.
עֵץ
329x
tree (noun)
construct chain examples
In fact, it is not only nouns which can appear in construct chains, but also participles and adjectives when they are functioning like nouns. 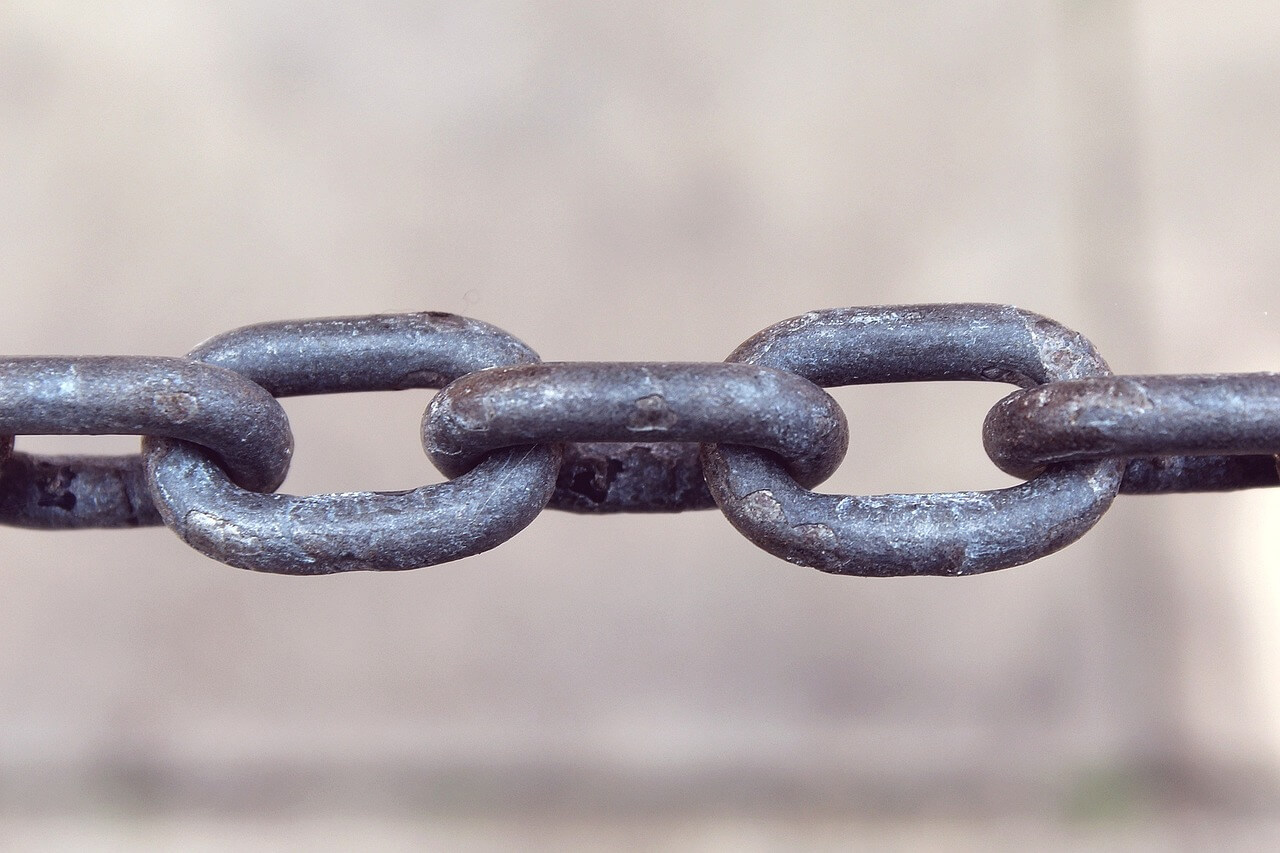 Link
Grammatical construction
There are a few things to mention regarding the grammar of construct chains. First, you will notice the dash-like line between some of the words in the examples above. This is called a maqqef and functions much like a hyphen in English. However, it has more to do with accents than anything else. It will sometimes appear in a construct chain and other times will not. Either way, the meaning of the construct chain is unaffected.
Secondly, pronoun suffixes are actually a form of construct chain. There is an example of this above, where a more wooden translation would have been, “the house of the brothers of the lord of me.” As you can see from this translation, the pronoun suffix is actually just another link in the chain. The only way it is different than other words in a construct chain is the fact that it is a suffix.
Finally, it is important to understand definiteness with regards to construct chains—whether the construct chain contains the sense of the definite article (i.e. ה in Hebrew, “the” in English). An entire construct chain in Hebrew is understood to be definite if the final word in the chain is definite—either because it is a proper noun, a pronoun suffix or possesses the definite article. From the examples above, you can see that they are all definite, except for the last example. The first three are definite because they end with a proper noun. The fourth is definite because the 1cs pronoun suffix (“my”) at the end of the chain. The fifth example is definite because of the presence of the definite article. But the last example is indefinite and hence is translated, “a tree of life.”
Spelling
As mentioned above, the spelling usually changes slightly for the first noun of a two-word construct chain. In longer construct chains, all the words in the chain will use this construct form except for the last word. The construct form typically shortens a vowel, changes an final a-class vowel + ה to a ת, or drops the final ם in the case of a masculine plural ending.
nouns
absolute and construct states
Construct chains in the songs we’ve learned
Take special note to which of the construct chains below are definite and which are not.
בֵּֽאלֹהִים
כָל־הַיּוֹם — “all the day”
הִנֵּה אֱלֹהֵינוּ
כָּל־פָּנִים – “every face”
וְחֶרְפַּת עַמּוֹ – “and the reproach of his people”
כָּל־הָאָרֶץ – “all the land”
כְּאַיָּל
אֲפִיקֵי־מָיִם – “streams of water”
קוּמִי אוֹרִי
וּכְבוֹד יְהוָה – “and the glory of the Lord”
מַה־יְּדִידוֹת
לְחַצְרוֹת יְהוָה – “for the courts of the Lord”
בֵּית הַיָּיִן – “the house of wine”
קוֹלִי אֶל־יְהוָה
Note that these construct chains are both definite even though the word “the” does not appear in our translation. (Their definiteness is seen by the fact they are possessive—“my...” and “his...”)
וְכָל־קְרָבַי – “and all my inward parts”
שֵׁם קָדְשׁוֹ – “his holy name”
שׂוֹשׂ אָשִׂישׂ
בִּגְדֵי־יֶשַׁע – “garments of salvation”
מְעִיל צְדָקָה – “a robe of righteousness”
הִנֵּה אֵל יְשׁוּעָתִי
מִמַּעַיְנֵי הַיְשׁוּעָה – “from the springs of salvation”
And our next song even has a construct chain in its title.
Biblearc app Path Courses Courses Learning Resources Login / Free Account Subscription
Glories Authors Groups Donate Gift certificates Ownership, thanks, copyrights and terms