Lesson 8: Prepositions, conjunctions and more
The most common words in the Bible (step 5 of 8)
אֵת — the untranslatable word
As you have seen in this course, sometimes a word in one language can be translated to a few different words in English. There are even times when a word simply has no English translation. In Hebrew, this just happens to be true of the most common word in the Bible!
We are speaking of the word אֵת—a particle that appears over 11,000 times in the Hebrew Bible. In fact, we just saw it in the last song we learned where it was translated “—” (which just means we cannot translate it). But while this word cannot be translated into English, this does not mean it is unimportant. For it serves the function of introducing a definite direct object. A direct object, you will recall, is the noun which receives the action of the verb. You will also remember the idea of definiteness from our study of construct chains. That is, a noun is definite if it is a proper noun, or if it possesses a pronoun suffix or the definite article. When these two pieces come together (i.e. when there is a direct object which is definite), it is typically introduced by the word אֵת.
You will also find the word אֵת frequently combined with a pronoun suffix as in the phrase “וַיְבָרֶךְ אֹתָם אֱלֹהִים” (“and God blessed them”). In such cases, note that the vowel on אֵת changes to a cholam.
The negative adverbs לֹא and אַל
Two other very common words which we have already seen are לֹא and אַל. These two words are the two ways to say “not” in Hebrew and interestingly enough are consonantally spelled the same only with the א and ל flipped around. The difference between them is that לֹא is used with finite verbs (perfect, imperfect, etc) whereas אַל is used with verbs of command (imperatives, cohortatives and jussives).
Be careful not to confuse these words with others which are written similarly, or even identically. Let’s put them side-by-side to be clear.
אֵת H853 — introduces definite direct objects (particle)
אֵת H854 — with (preposition)
אַל H408 – do not (adverb)
אֵל H410 – god, God (noun)
אֵל H413 – to (preposition)
Behold (הִנֵּה)!
Another common word to mention is the word הִנֵּה. We have already seen this word in four different songs and so you should know what it means. We include it here simply to point out its unconventional function as an interjection. As an interjection, it does not grammatically connect very strictly to other words in the sentence, but simply functions as an attention-getter.
As with אֵת (both the particle and preposition), it can take a pronoun suffix. For example, הִנֵּנִי means “Here I am!” 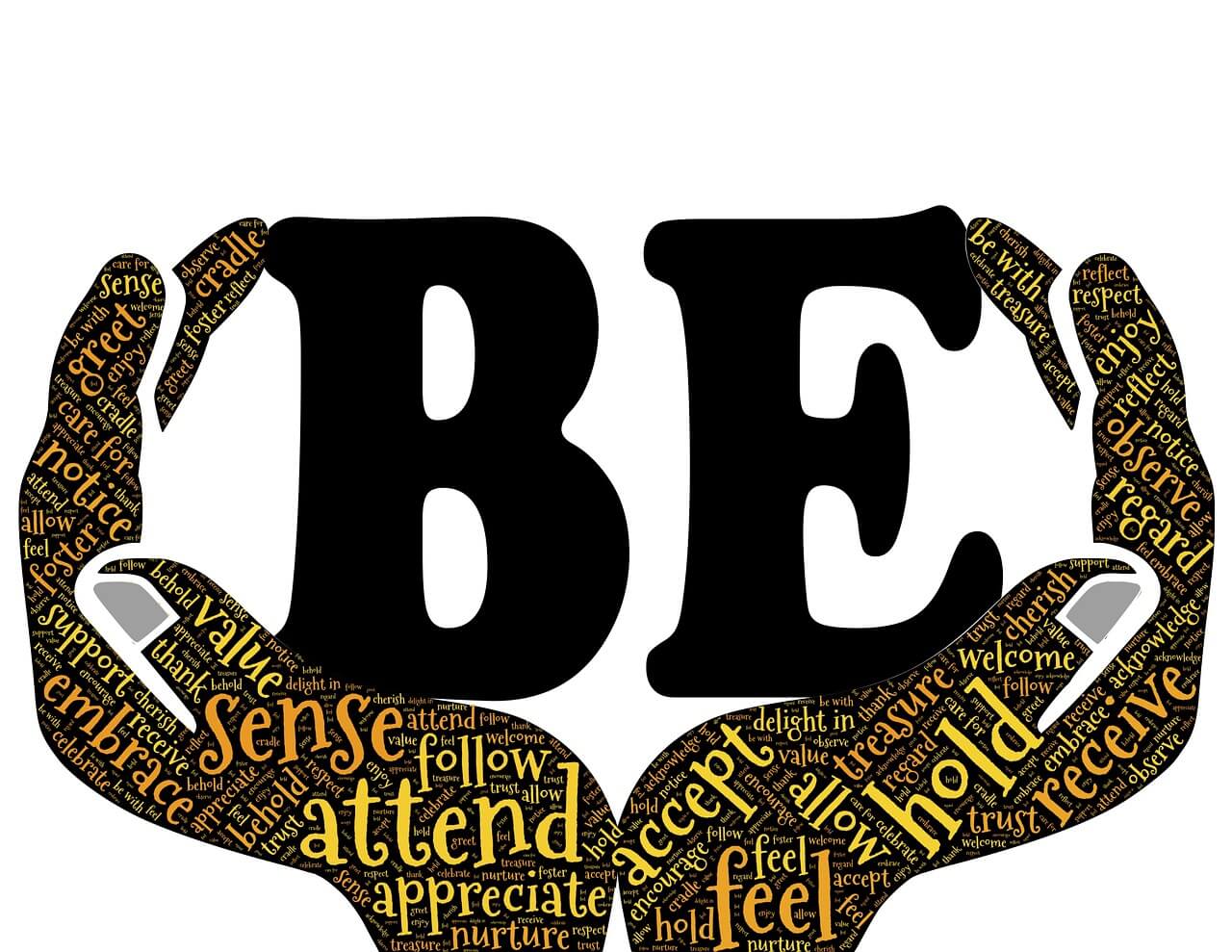 Link
יֵשׁ and אַיִן – There is and there isn't
Two other particles to learn are יֵשׁ and אַיִן. The grammar of these words works quite differently than their English counterparts. Whereas in English we use the phrases “there is” and “there is not” to express the presence or absence of something, Hebrew does this in single words. These words are not verbs, but they do carry a verbal force. Consider this example in Proverbs 13:7 which translates in the ESV to “One pretends to be rich, yet has nothing; another pretends to be poor, yet has great wealth.”
יֵשׁ
מִתְעַשֵּׁר
וְאֵין
כֹּל
מִתְרוֹשֵׁשׁ
וְהוֹן
רָב׃
These words can also take pronoun suffixes—something to look out for.
Adverbs
Of course, Hebrew also uses adverbs. But since these words do not conjugate or take suffixes, nothing special needs to be said about them. You have already seen or will see the most common among them in the vocabulary.
These words in the songs we’ve learned
הִנֵּה אֱלֹהֵינוּ
וְאָמַר בַּיּוֹם הַהוּא הִנֵּה אֱלֹהֵינוּ זֶה – “and he will say on that day, ‘Behold, this is out God!’”
לֹא־גָבַהּ לִבִּי
לֹא־גָבַהּ לִבִּי וְלֹא־רָמוּ עֵינַי וְלֹא־הִלַּכְתִּי בִּגְדֹלוֹת – “my heart is not lifted up and my eyes are not raised, and I have not walked in things too great...”
אִם־לֹא שִׁוִּיתִי וְדוֹמַמְתִּי נַפְשִׁי – “if I have not calmed and quieted my soul”
קוּמִי אוֹרִי
כִּי־הִנֵּה הַחֹשֶׁךְ יְכַסֶּה־אֶרֶץ – “for, behold, the darkness will cover the land”
קוֹלִי אֶל־יְהוָה
בָּרֲכִי נַפְשִׁי אֶת־יְהוָה וְכָל־קְרָבַי אֶת־שֵׁם קָדְשׁוֹ – “bless [אֶת] the Lord O my soul and let all that is within me [bless] [אֶת] his holy name”
הִנֵּה אֵל יְשׁוּעָתִי
הִנֵּה אֵל יְשׁוּעָתִי – “Behold, God is my salvation”
אֶבְטַח וְלֹא אֶפְחָד – “I will trust and will not fear”
הִנֵּה כְעֵינֵי עֲבָדִים
הִנֵּה כְעֵינֵי עֲבָדִים – “Behold, as the eyes of slaves...”
רָנִּי רָנִּי
Note the presence of both לֹא and אַל below. לֹא is used in the first example because it is modifying an imperfect. On the other hand, אַל is used twice in the second example to modify imperative commands.
לֹא־תִירְאִי רָע עוֹד – “you will not fear evil any longer”
אַל־תִּירָאִי צִיּוֹן אַל־יִרְפּוּ יָדָיִךְ – “Do not fear, Zion. Do not let your hands fall limp.”
שִׁיר הַֽמַּעֲלוֹת
בְּשׁוּב יְהוָה אֶת־שִׁיבַת צִיּוֹן – “when the Lord returned [אֶת] the restoration of Zion”
Biblearc app Path Courses Courses Learning Resources Login / Free Account Subscription
Glories Authors Groups Donate Gift certificates Ownership, thanks, copyrights and terms