Lesson 4: Verbs—stems
Hiphil and hophal (step 6 of 10)
Causal active and passive stems
The third and final pair of stems is the hiphil / hophal pair, where hiphil is the active and hophal its passive counterpart. What distinguishes these two from the other five stems is the causal sense they usually bring to a root’s base meaning.
This causal sense can be easily illustrated in two of the most common words to appear in the hiphil and hophal—בּוֹא and מוּת. The base meaning of בּוֹא, you will recall, is “come.” Hence, this is its meaning in the qal stem. In the hiphil, however, it is causal and thus carries the meaning “cause to come.” Or more simply in English: “bring.” The meaning of בּוֹא in the hophal is the passive counterpart to this, namely “be brought.”
The base meaning of מוּת is “die” and likewise we see it carry that simple meaning in the qal stem. Just like we saw with בּוֹא, this meaning becomes causal in the hiphil and hophal, giving the sense “kill” (hiphil) and “be killed” (hophal).
hiphil & hophal perfect for בּוֹא
hiphil & hophal imperfect for בּוֹא
You will notice we have used בּוֹא for our paradigms even though it is a “hollow verb” with a ו as the second letter of its root. The reason we have done so it because it appears frequently in the hiphil and also in the hophal—something not true of any non-irregular verbs. Besides, the regular form is not too different from this hollow form.
The most important things to notice in these forms are as follows. (1) There is a ה prefix in the perfect for both the hiphil and hophal, something you can easily remember given the “h-” that begins the names of these stems. (2) The hiphil often contains a י between the second and third letters of its root. We see this in the 3rd person perfects and all the imperfects. (3) The hophal, on the other hand, contains a וּ or kubutz vowel between the prefixed ה and the first letter of its root in every form.
Remember these three points and you will be able to identify the hiphil and hophal stems the vast majority of the time.
Genesis 43:17-18
Once again, the words of these verses are clickable for you to check yourself. But don’t click too quickly, as you actually have already learned all the words contained in this text. So give particular note to the hiphil and hophal forms of בּוֹא you find here and delight in the fact you can read Hebrew and understand it!
וַיַּעַשׂ
הָאִישׁ
כַּאֲשֶׁר
אָמַר
יוֹסֵף
וַיָּבֵא
הָאִישׁ
אֶת
הָאֲנָשִׁים
בֵּיתָה
יוֹסֵף׃
וַיִּירְאוּ
הָאֲנָשִׁים
כִּי
הוּבְאוּ
בֵּית
יוֹסֵף
... 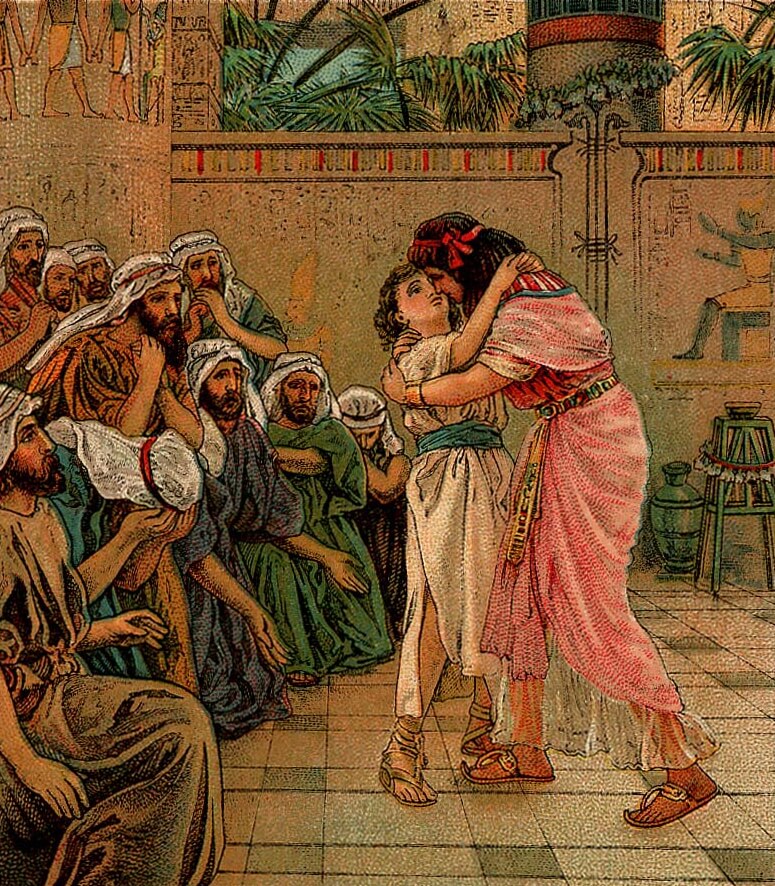 Link
Hiphil verbs in the songs we've learned
Once again, the passive stem of our pair is far less common and has not appeared in any of the song we have learned to this point in the course. There have, however, been two appearances of the hiphil stem.
הִנֵּה אֱלֹהֵינוּ
In the first instance we find a slightly altered form as a result of the root containing a weak first letter. For some reason, a וֹ is inserted to a hiphil form in the imperfect with words containing a י as the first letter in their root. This is something you will also find with other verbs beginning with י. For example יָלַד becomes הוֹלִיד (“he fathered”), and יָצָא becomes הוֹצִיא (“he brought out”).
A further complication in וְיוֹשִׁיעֵנוּ is the presence of a suffix acting as the object of the verb—something you will learn about later in the course. For now, it is enough to note that the נוּ to end the word is not a part of its morphology. The part to give attention to in parsing this verb is ַיוֹשִׁיע.
וְיוֹשִׁיעֵנוּ — “and he will save us”
וְחֶרְפַּת עַמּוֹ יָסִיר מֵעַל כָּל־הָאָרֶץ — “and the reproach of his people he will remove from upon the whole earth”
Biblearc app Path Courses Courses Learning Resources Login / Free Account Subscription
Glories Authors Groups Donate Gift certificates Ownership, thanks, copyrights and terms